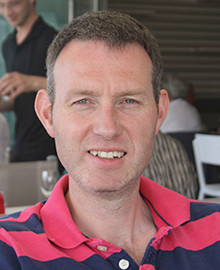 David is a Consultant in Palliative Medicine at ACCORD Hospice and The Royal Alexandra Hospital in Paisley. After graduating from Aberdeen University he moved to the West of Scotland initially commencing GP training later transferring to general medical training. David was lucky enough to be accepted on to the West of Scotland Palliative Medicine training scheme and following completion of his training moved to Paisley.

He was fortunate to participate in several strands of work in relation to” Living and Dying Well” and for three years had the privilege of being co-chair of the Scottish palliative care guidelines with Dr Paul Baughan. More recently he has been working with colleagues in Renfrewshire and the Scottish Public Health Network to develop a whole data map of palliative and end of life care provision in the Renfrewshire HSCP.