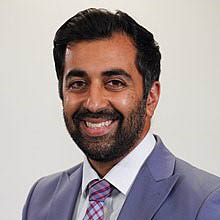 Humza Yousaf was born in Glasgow on April 7, 1985. He was educated at Hutchesons' Grammar School and the University of Glasgow, graduating with a degree in Politics. He is also an alumnus of the US State Department's prestigious International Visitor Learning Programme.

He went on to work in the Scottish Parliament as an aide to the late Bashir Ahmad MSP. He was a Parliamentary Liaison Officer to former First Minister Alex Salmond MSP and was elected as an MSP for the Glasgow region in May 2011. He was appointed Minister for External Affairs and International Development in September 2012. Humza Yousaf was previously Minister for Transport and the Islands, and was appointed Cabinet Secretary for Justice in June 2018.